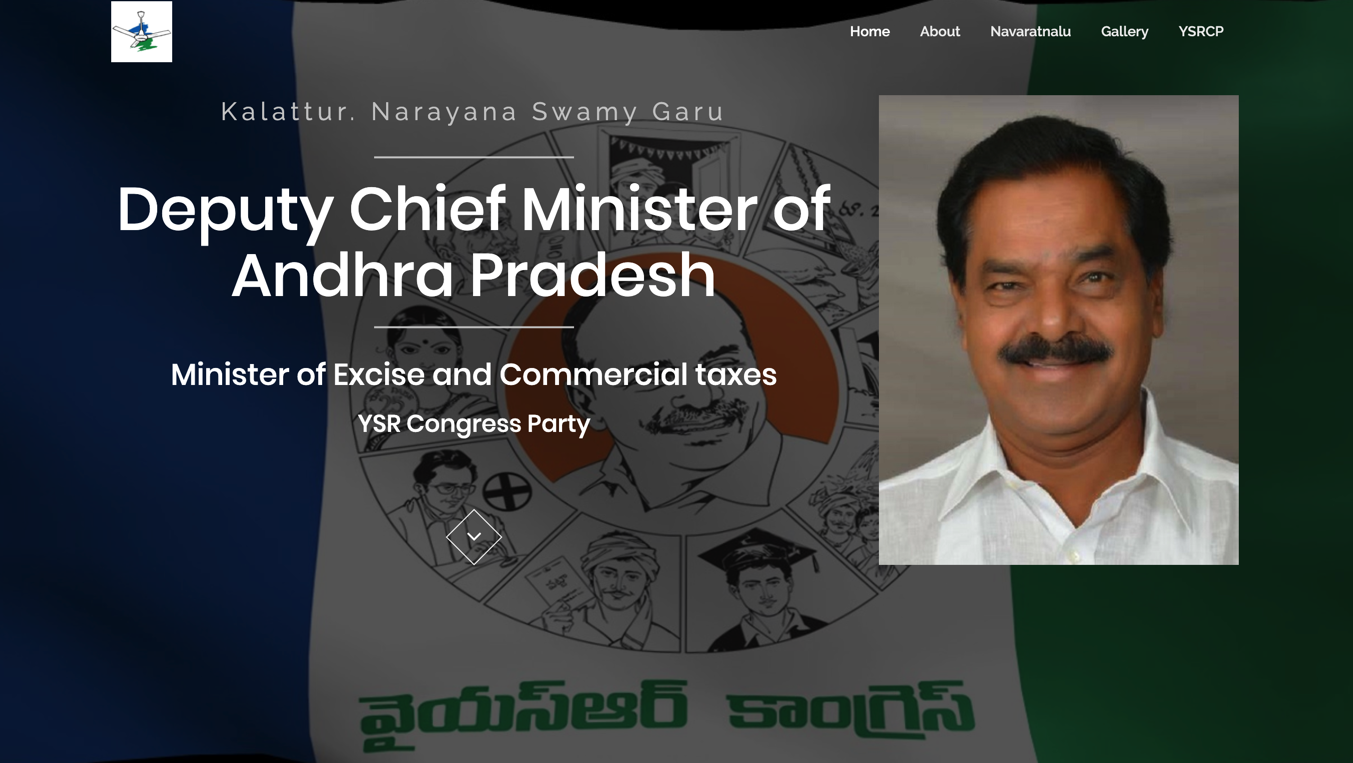 Website is Designed, Developed to be responsive on all devices like Mobile, Tabs, Desktops. Website is Hosted in Netlify. Website is built for Deputy Chief Minister of Andhra Pradesh, Shri Kalattur Narayana Swamy, He is current Member of Legislative Assembly and Minister of Excise and Commercial Taxes.

We applied Neural SEO Network to website and start to see a steady and increased traffic. Most relevant traffic and better keywords ranking and great organic presence.

Everything about a Deputy Chief Minister

After reading the facts mentioned above, the question which arises is that the Dy CM must be having some powers or responsibility. Even if the post is created just to maintain a balance then too, he/she must be in control of something, right? The answer to this will be very ambiguous as there is no well defining document that suggests what powers or responsibilities does a Dy CM get. He/She will get paid almost equal to that of the Cabinet ministers and enjoy the same perks as a Cabinet minister would.

Usually, each minister gets one or two portfolios. Portfolios in simpler words would mean the area of responsibility for that particular minister. The two most crucial portfolios are- Home and Vigilance, which usually remain with the Chief Minister. The power of transferring or posting of Class I officers (For example- IAS officers, DIG, DCP, etc.) will also remain with the Chief Minister.

A very general question which people have in mind regarding this hierarchy is that do all the files or documents which go to the Chief Minister have to pass through the Dy CM first? No, this is certainly not the case. The only files which go to the Chief Minister after it been through the Deputy CM are the files which are related to the portfolios of the Dy CM.

Some of the ideal qualities which a Deputy CM should have are as follows:

Kind- He/She should always be kind to their people as those people depend on him/her. If a person is rude then even if he/she fulfils all of his/her responsibilities still people won’t consider him/her as an ideal Dy CM

Be selfless- He/She should be selfless and should work for the people instead of just filling their pockets. Should never let his/her people suffer knowingly or due to his/her negligence

Polite- He/She should always be polite while talking to the people. It is also an essential quality which everyone should have, and when one is on such a responsible position then he/she should be a master of this quality

Be responsible- He/She should be a responsible person who can be trusted by the people. If there’s a fault from his/her side, then he/she should come in the front and accept it instead of trying to play the blame game